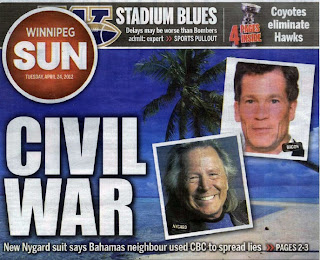 Peter Nygard contends his Bahamian neighbour conspired with others to damage his reputation and force him off the Carribbean island he calls home forever.

And he used the CBC to try to do it.

To do so, Nygard alleges Bacon was willing to pay women up to $10,000 to appear on camera for a CBC documentary about Nygard and fabricate stories of misconduct.

This lawsuit is one of several Nygard has mounted in the past two years that involve the CBC and the controversial documentary.