You won’t believe the disgusting comments made by the CBC as to why Piss Christ is fair game but pictures of Mohammad are off limits.

The CBC lied. As the pic above indicates (see original story link at bottom) they have shown Piss Christ on more than one occasion, as in this article:

Crucifix art they call it.

I wonder if Muppet Mohammed would get Strombo coverage?

How about Violent Christ on CBC Music? Merry Christmas Bitches? 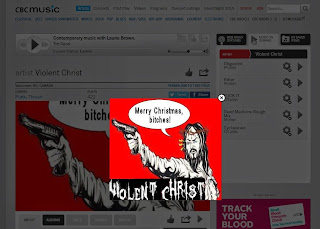 Even Youtube initially removed this vid but not CBC.