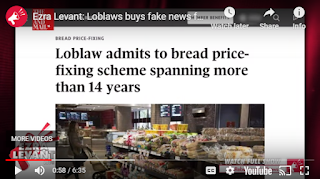 On last night's episode of The Ezra Levant Show, I reported on Loblaws discreetly paying CBC to air promotional content.

It was a game show for amateur chefs. It was promoted across their platforms, including on Steven and Chris.

But it was bought and paid for by Loblaws, the crooked Liberal company that got $12 million for free fridges. We don't know how much Loblaws paid the CBC to run the show. But take a look at the release -- specifically, where show contestants agree that their recipe, name and likeness is licensed to Loblaws.

Go on a CBC game show, and you've just sold your rights to Loblaws. For free.

So how much money did Loblaws give to the CBC for this promotion? And how much of that money was part of a secret deal to prevent our state broadcaster from calling out this massive company for their bread price fixing scandal and for their free $12 million grant?