On May 17, HonestReporting Canada notified senior editors at CBC News, CTV News, the Globe and Mail, and the Toronto Star, about how these media outlets wrongly identified a dead Palestinian as a “medic,” whereas in fact, he wast a member of the Hamas terrorist organization.

Hamas produced an infographic which acknowledges that Abuhassanin is one of their members. He’s pictured on the top row, 2nd from the right identified by HRC with the red circle. (HonestReporting Canada secured an expert translation of the infographic which describes Abuhassanin as being a “Captain” of Hamas’ “Civil Defense Service” which belongs to the Hamas Ministry of Interior which is responsible for all “security” services.) 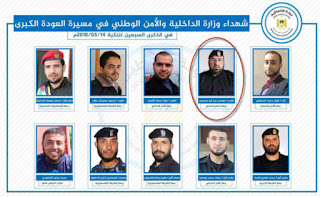 The individual in question was named Musa Abuhassanin who was reportedly shot and killed (allegedly by Israeli snipers) after having helped Palestinian-Canadian doctor Tarek Loubani, a well known anti-Israel activist.

CBC Radio’s As It Happens program on May 15 featured an interview with Dr. Loubani who described Hamas “medic” Musa Abuhassanin as “my rescuer, he was a very bright guy, an incredible man.” Loubani has also described Abuhassanin as having had “had a great laugh and was a good paramedic”. The CBC As It Happens website describes Abuhassannin only as a “medical volunteer”.

To date, Tarek Loubani has not commented on the revelation that Abuhassanin was a member of the outlawed terror group Hamas, a man Loubani described as being his “rescuer, he was a very bright guy, an incredible man” who “had a great laugh and was a good paramedic”.

In light of this revelation, it’s of paramount importance that our media reserve judgement and do their due diligence to report the facts once they are established, instead of spreading misinformation and propaganda.