From attacking dissident Chinese journalists to parroting World Health Organization talking points, here are five times that the state broadcaster CBC made fools of themselves during the coronavirus pandemic.

A shrinking CBC television audience has left the CBC with plunging advertising revenues, according to Blacklock’s Reporter.
In the first six months of 2019, the CBC generated advertising revenues of $90.9 million, according to the public broadcaster’s second-quarter financial report. That is slightly less than the $92.8 million the broadcaster collected in ad revenue during the same time frame in 2017.
However, the amount the CBC collected from ad sales plunged 53% during the last five years. The Crown corporation raked in $192.2 million in the first six months of 2014.
The corporation receives $1.2 billion annually from the Canadian government.
Read the full story here.
No comments:

Did you know that across Canada, over a total of 27 stations coast to coast, the average audience for CBC’s supper hour newscast was 329,000 people? That’s not 329,000 people per market, that is across the country.
Compare that to just one of CTV’s local supper hour newscasts, CFTO in Toronto, which averaged 1.4 million viewers per night in the first week of 2020. That doesn’t include other major markets like Vancouver, Montreal, Calgary or Ottawa where CTV outstrips CBC. It doesn’t include Global News, which is dominant in Western Canada and like CTV doesn’t take a $1.5 billion per year subsidy from the taxpayers.
These CBC ratings aren’t numbers that I’ve made up, they were contained in CBC’s most recent annual report and highlighted by Ottawa-based media outlet Blacklock’s Reporter.
Read the full story here.
No comments:

Please treat this email as an official complaint.

My complaint is as follows: the CBC  news web page did not report on the release of a study -- by the Canadian Coalition on Human Rights in China -- documenting on Chinese government intimidation of Chinese-Canadian dissident groups in Canada. The study can be accessed via the Amnesty International Canada web page, here:
https://www.amnesty.ca/news/human-rights-defenders-increasingly-face-threats-intimidation-over-china-advocacy-report
I did a search of the CBC web site, using the term "Canadian Coalition on Human Rights in Canada", and could not find any article. Other national media in Canada covered the story.

I contend that the issue of intimidation of various Chinese-Canadian dissidents in Canada is important, and should be covered by CBC News. This study, promoted by Amnesty International Canada, offers a rather exhaustive and complete discussion of recent intimidation tactics by the government of China. I specifically refer to the CBC web page -- but my complain could be broadened to include other CBC media (TV and radio), if you can find that these latter media were negligent in reporting on this study.

The above constitutes my complaint.

I might add that the CBC web page recently published two attack articles against the Epoch Times Canada, perhaps the leading house organ for Chinese-Canadian dissidents in Canada:
https://www.cbc.ca/news/canada/epoch-times-coronavirus-bioweapon-1.5548217

I am not lodging a complaint against these latter two articles. But what I am complaining is that, on balance, looking at what was published and what was NOT published in the CBC web page, during this recent period, CBC news chose to ignore the concerns of the Chinese-Canadian dissident community.

No doubt there’s a multitude of Canadian channel surfers who accidentally find themselves watching CBC’s old-is-new again but supposedly advertiser-friendly, Family Feud Canada, hosted by Gerard Francis Donoghue.
That’s Gerry Dee, for CBC non-watchers, the Toronto gym teacher turned stand-up comedian who has hosted a number of forgettable CBC shows — forgettable because I have never watched one of them to the end.
Read the full story here.
No comments:

CBC Exposed is a call to action 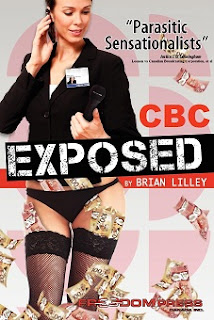 This book takes on the holy grail of the Canadian media landscape and lays bare the truth about CBC.

Reckless reporting at the state broadcaster has ruined lives and cost taxpayers millions upon millions in settlement costs yet no one has ever been held to account.

This book does what the consensus media cowards are afraid to do, tell the truth about CBC. From reporting driven by vendettas to outright biases against conservatives, gun owners, Israel and any other group that doesn't fit their vision of Canada.

CBC Exposed is a call to action to rein in this broadcasting giant.

Local news is vital. It provides an essential service, especially in times of emergency. People rely on local broadcasters to provide them up-to-the-minute information told by local journalists.
So what does the CBC do during an unprecedented public health crisis? It shuts it all down.
Read more here.
No comments:

Two CBC staff members can be heard laughing and casually conversing while fallen military members are carried off in coffins. Disrespectful ...
https://twitter.com/TrueNorthCentre/status/1258240461992611842 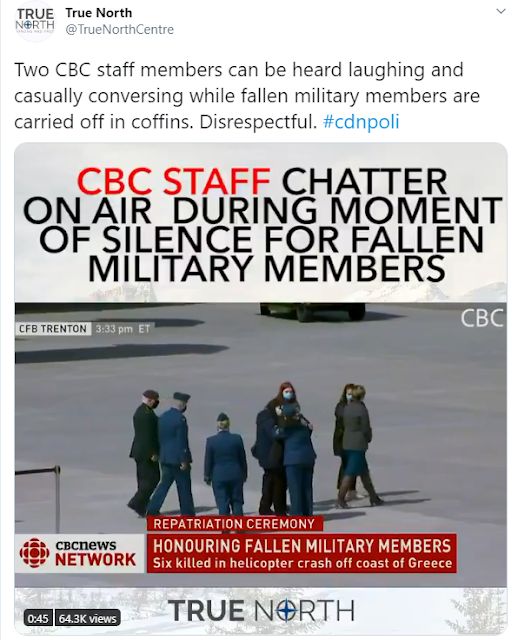 Imagine that you ran a business where you gave a key employee a raise — not a small one but a significant pay hike — and the worker turned around and said that he or she should do less work for more money.
That is what CBC is doing to the Canadian taxpayer right now.
After getting a boost from taxpayers under the Trudeau Liberals, the state broadcaster is asking to broadcast less Canadian content. Or, as I like to say, they want to do less of what we pay them for while taking more of our money.
Read the full story here.
No comments:

CBC is under fire after publishing a hostile article targeting an independent media outlet founded by members of a highly-persecuted Chinese religious minority for its accurate reporting on China.

The Epoch Times was established in 2000 by Chinese immigrants attempting to shed light on the abuse and censorship of members of the Falun Dafa/Gong religion in mainland China. It has been a mainstay of anti-Chinese state censorship, often publishing whistleblower accounts of human rights abuses taking place within the nation.

CBC’s article claimed “Canadians were upset” by the receipt of an unsolicited copy of The Epoch Times in the mail, calling it “racist and inflammatory” and accusing the paper of peddling conspiracy theories that the coronavirus may have been created in a lab.

The Epoch Times recently published a special edition on how Beijing’s coverup of the coronavirus outbreak in Wuhan led to the global pandemic with the front-page headline “How the Chinese Communist Party Endangered the World.” It’s an eight-page collection of Epoch Times articles distributed to select areas in Canada, as we believe it contains important information for Canadians to have.
On April 29, CBC published an article devoted to this special edition that is deliberately misleading and intentionally excludes crucial information we provided to CBC prior to the publication of its article. The sole purpose seems to be to discredit The Epoch Times and our reporting on the coronavirus.
Read the full story here.
No comments: