CBC columnist vows to have a “party when Harper dies”

You run across a lot of lefty crazies on Twitter who wish conservatives harm, or call Stephen Harper "Adolf Hitler" -- but you certainly don’t expect something this insane from a CBC columnist: 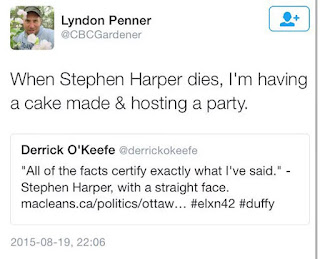 Lyndon Penner is a gardening columnist for CBC News Saskatchewan and that he still has his job after sending out this tweet is stunning.

I will be filing a complaint with the CBC Ombudsman and will update with the response.