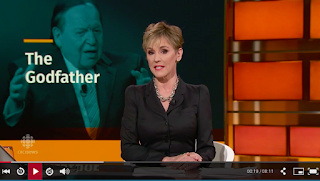 The CBC program centres on how wealthy Jews (specifically casino magnate Sheldon Adelson and his net worth of $40-billion+) effectively control U.S. President Donald Trump and his inner circle which was “instrumental in persuading Trump” to move the U.S. Embassy to Jerusalem and to pull out of the Iran nuclear deal.

The report attempts to shame former Canadian prime minister Stephen Harper for having “ties” with Adelson and for their shared values and interests when it comes to being a friend to Israel and for being critics of the Iran nuclear deal. Mesley lists 9 ties on her Twitter thread.

At its core, the report centres on how Jewish money, which is both influential and “disproportionate,” effectively controls U.S. Middle East foreign policy which thereby enables the Israeli tail to wag the American dog.

Adelson is described as “the Godfather of the Republican party”.