Fake News On CBC? Who Funds This Nonsense?

When a government news agency promotes false information to subvert a government scientific safety decision, it is time to re-evaluate their role and if they should even receive government support. Their November 6th 2017 interview is a shameful distortion of facts, evidence, and directly opposes the science-based decision that government regulators made.

As usual, the object in question is glyphosate, the low-toxicity herbicide that has been used for about four decades. It has been recognized for its low toxicity by 100 world governments, most that did their own independent evaluation. It has a reasonable half life in the environment, low environmental impact, and efficacy against a wide variety of weeds. 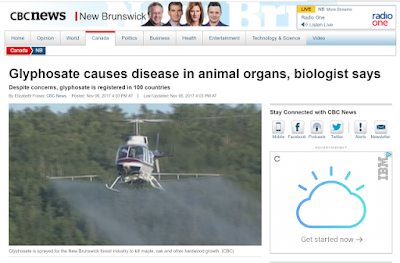 The opening sentence is just false. "Glyphosate accumulates in all our organs " says Theirry Vrain. Someone should revoke his scientific credentials. There is no evidence to support this position, he is making up information with the intent to scare. He's using his position as a former government scientist and doctorate holder to spread false information.