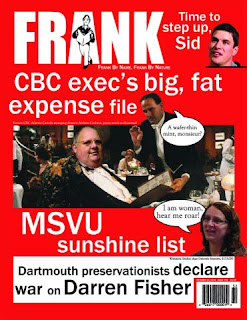 Fret not, media consumers of Canada’s national broadcaster, we at Frank have discovered the source of that odd sucking sound that seems tied to the ever-lowering levels of lucre available to the Mother Corpse. It’s none other than the personal expense claims of CBC’s head of strategy for CBC News and Centres (English division) and former managing director of Atlantic Canada, Andrew Cochran.

Over 900 pages long, and covering between March 10, 2008 and June 6, 2015, and accounting for over $457,000 in expenses (over $72,000 of which was literally eaten in the form of claimed meals) from travel to food, to more travel, the combined Cochran expense reports paint what seems to be a shocking disregard for the oft-lamentably shrinking budget of the CBC, with tens of thousands of dollars spent personally by the big guy each year.

For most media outlets these days, caught as they are in the torrent of chaotic change that is the internet, the prevailing financial theory is “pinch every penny until it screams.”

The result has been, even in the halls of the great and powerful CBC, a distinct defunding of costly and complicated investigative reporting (or even quality content creation) in favour of cheap-to-produce and easy-to-promote panel programs, celebrity gossip reports, click-bait, promoting (whether overtly or covertly) consumer goods as reviews, and endlessly reheated press releases, give or take a comma or two.

Not quite so when you’re a big-wig at the Mother Corpse, it seems. Despite the last few years being tight/tense/downright heart-attack-inducing times, Cochran, and presumably those in equal or higher positions, seem to have made no effort to cut back on the costs.

The full article can be found here.