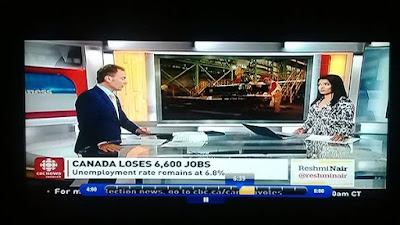 Check out the tweet above from @jimmydubyyc’s Twitter account three days ago on August 7th at 9:06 in the morning. My thanks to him for the screenshot. If ever you needed concrete proof that Canada’s national news service has an anti-Conservative bias, then the headline across that image says it all.

Now, take a look at this Google search page confirming that job growth. At the bottom of the first Google page, there are even a couple of CBC News items that say “modest job growth in July.”

So, what happened? A simple error? An employee who was out of line? Or, was the corporation that taxpayers fund to the tune of $1 billion dollars a year deliberately trying to make the Conservative Government’s economic record look bad? Whatever the reason, the onscreen message was a blatant error and nothing short of yellow journalism. And, those responsible should be fired!