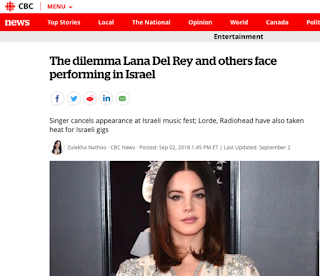 HonestReporting Canada takes strong issue with the highly editorialized word choice used by CBC editors in claiming that a “dilemma” exists for Lana Del Rey and other musicians who chose to perform in Israel. The headline above was featured in a September 2 article by CBC entertainment reporter Zulekha Nathoo.

The word “dilemma” is defined as follows (emphasis added): “a situation in which a difficult choice has to be made between two or more alternatives, especially equally undesirable ones.”

The CBC’s headline effectively casts Israel as a pariah and rogue nation.

Importantly, the CBC article itself does not use the word “dilemma,” only the headline does.