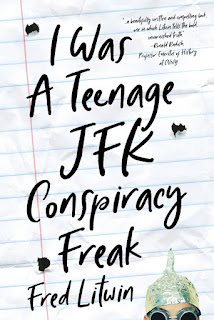 Fred Litwin recounts how he became a JFK conspiracy freak at eighteen, and then slowly moved to believe that Lee Harvey Oswald was the lone assassin.

I Was a Teenage JFK Conspiracy Freak demonstrates how the left and the right have used the JFK assassination to drive home myths about power in America. There is also the persecution of a gay man prosecuted for conspiring to kill Kennedy, the ugly story of Oliver Stone's homophobic film JFK, an exposé of conspiracy nonsense on the Canadian Broadcasting Corporation, a look at how the Soviets tried to influence American public opinion into believing the CIA was behind the murder, and the incredible secret why some JFK assassination documents must remain locked up forever. And a whole lot more.
PRAISE FOR I WAS A TEENAGE JFK CONSPIRACY FREAK
"As a young man growing up in the heyday of Kennedy assassination theorizing, Fred Litwin believed a conspiracy killed JFK.  And then he grew, and he studied and he researched.  The result is this volume, a thorough, cogent and meticulously argued case for a lone assassin.  A seasoned conspiracy skeptic will learn new things here, and a conspiracy believer open to looking at the other side could do no better than this volume."
John McAdams, Associate Professor of Political Science at Marquette University and author of JFK Assassination Logic: How to Think about Claims of Conspiracy
"This is a great book for conspiracy buffs-and, more important, for those who debunk such theories. Fred Litwin does a terrific job in blowing up the myriad JFK assassination scenarios, not least in completely demolishing The Fifth Estate's decades-long efforts to "uncover" the truth. The CBC's lead investigative show is revealed here to be more than slightly unhinged."
J.L. Granatstein, Author of Who Killed Canadian History?
"In Fred Litwin's marvelous book, he charts how he went from an early skeptic to someone dedicated to dissecting their arguments and carefully tearing them apart. He puts the final nail in the coffin of all the conspiracy theorists, who develop new ones as old theories are proven wrong. Everyone still concerned with JFK's death and thinks it's a mystery must read this book. They will be glad they did."
Ronald Radosh, Professor Emeritus of History at CUNY, opinion columnist for The Daily Beast and co-author of A Safe   Haven: Harry S. Truman and the Founding of Israel

I Was a Teenage JFK Conspiracy Freak