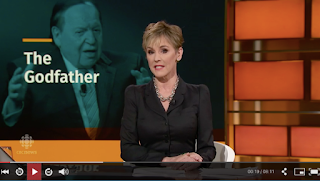 You’d expect to see outrageous Jewish conspiracy theories in the annals of Holocaust denial websites, not on our public broadcast’s airwaves.

The CBC program (watch by clicking here or by clicking immediately below) centres on how wealthy Jews (specifically casino magnate Sheldon Adelson and his net worth of $40-billion+) effectively control U.S. President Donald Trump and his inner circle which was “instrumental in persuading Trump” to move the U.S. Embassy to Jerusalem and to pull out of the Iran nuclear deal.

The report attempts to shame former Canadian prime minister Stephen Harper for having “ties” with Adelson and for their shared values and interests when it comes to being a friend to Israel and for being critics of the Iran nuclear deal.

Read the full story, and see the video here.