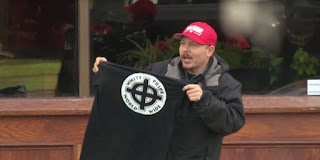 CBC Marketplace caused a stir in Alliston when it started selling T-shirts bearing "white power" and "Make Canada Great Again" slogans in a social experiment designed to see how Canadians react to racism.

The reaction by some residents was to call the police when they saw a CBC actor selling the T-shirts on Victoria Street in downtown Alliston.

Nottawasaga OPP media relations officer Const. Harry Lawrenson confirmed the detachment put an end to the film shoot on Jan. 11 after receiving complaints from a couple of residents.