On Friday’s episode of The Ezra Levant Show, Frank H. Buckley, Foundation Professor at the Antonin Scalia Law School, George Mason University, joined me to discuss his recent appearance on the CBC where he criticized the Liberals' incompetence during the NAFTA negotiations. 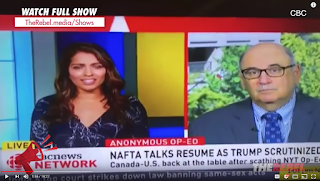 There were no fireworks or hysterics or arguments - the CBC host was literally left stuttering with confusion at a perspective that those in Canada’s media party, have never heard.

See the story and video here.